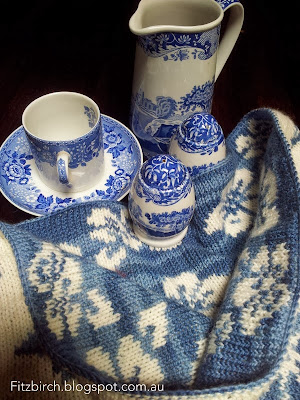 Last year my son bought me 2 balls of SHIBUI sock wool in 'storm' for my birthday.  It is such lovely stuff that I decided to save the wool for just the perfect pair of socks.  I though I had found the right pattern but when I started to knit, the pooling was such that the front half of the sock was light blue and the back half was dark blue - giving the impression that I had been standing too long in the sun and they had faded.  It was something that I could not live with, so I undid it and searched for something else.

It was at this time that I decided to give double knitting a try.  I charted a pattern for some flowers and decided to jump in, head first, with a cowl. 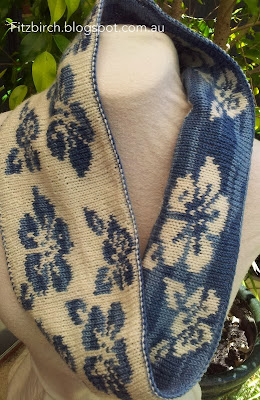 I have always had a 'thing' for delicate blue and white plates, cups and saucers and teapots.  When Deb lived in England, she lived very close to a Spode factory outlet shop and every birthday and christmas, a little bit of Ol' England would find it's way to my display cabinet.

I noticed when I was knitting up my trial sock that the wool reminded me a great deal of the variegated blue in my spodeware so I took this as inspiration for my cowl.

Before I could start however, I had to actually learn how to double knit and I was remarkably surprised to realise that it is nowhere near as difficult as I had though.  I watched this you-tube video  on how it was done and made a start. 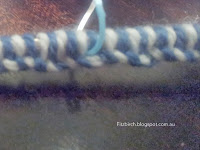 Cast on 180 stitches using the double knitting method.  ie.  you will end up with 360 stitches.  Cast on 1 blue, then 1 creme until you have 180 of each colour.  Place a stitch marker after each 45 sets (90 stiches) of cast on.  The pattern repeat of the cowl is 45 stitches and having a stitch marker in place makes counting stitches much, much easier.

I also use a knitting thimble.  Much like fairisle, there can be a bit of a mess with the constant wrapping of the yarn and it can get very fiddly when dropping yarns and then picking them back up once they are wrapped.  There appears to be many methods to double knit.  I am a standard knitter and hold the yarn in my right hand (I am right handed).  I place the thimble on my right index finger and the thimble not only keeps the colours separate, but allows you to easily pick up and the knit the correct colour quite quickly. 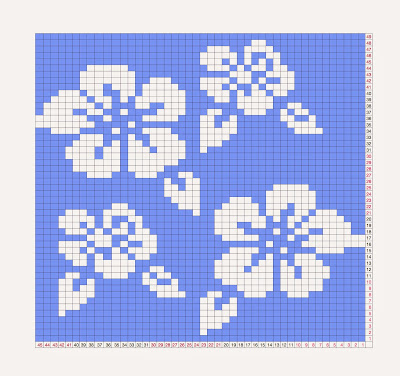 Once you have cast on your stitches, follow the chart and then, using the double knit cast off method, cast off all the stitches and block your cowl.
(Downloadable from here) 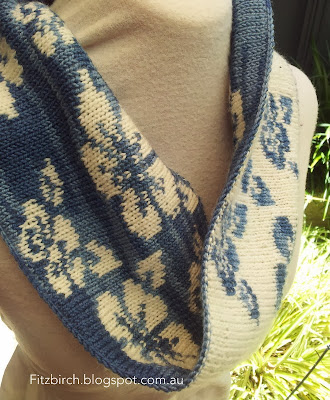 If you would like a smaller fitting cowl, it is just a case of repeating the pattern 3 times instead of 4.

Be warned - double knitting is not the fastest way to achieve a cowl, but well worth the effort!


More Cowls and Scarves from FitzBirch