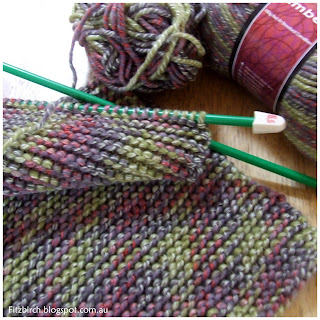 The Dr Who Scarf is something I've been pondering for a while now.  It's a mighty project to undertake and by all accounts can get a tad tedious after a while, so I've been delaying and pushing it to the furthest reaches of my mind, all the while knowing that it will happen one day, just not right now.  Last week when I headed over to The Wool Shop for a bit of a browse and pursuit of a gift for a fast approaching birthday, I actually happened across a sale on some Panda "Amber"  in the discontinued section.  There's always a slightly unnerving feeling when buying discontinued yarn, the thrill of a bargain coupled with the thought of running out mid project, really is living on the edge for me craft wise.  I couldn't resist though as there was a little sample knitted up in garter stitch and it was calling to me in a way that said "this will be good practice for Dr Who - let's see just how patient a knitter you really are?"
even though I think we all know the answer to that already!


The first hint of my impatience in this instance was that the wool called for a 7mm needle and I could only find one needle of that size.  The other I know to be lurking somewhere at the bottom of my Hope Chest, but rather than rummage through it, I grabbed an easily accessible 6.5mm pair of plastic greens.  Not my favourite thing to knit with, but I was in a "near enough" kind of mood.  It all started frightfully well I have to say, until the wool started self patterning in vertical stripes!  It wasn't exactly how I planned it to go, and a knitter with more perfectionist tendencies than I would have stopped at this stage and revised the number of stitches to stop it from happening, but not me.  While all this was happening my Mum mentioned that she was having similar problems with some baby wool she was knitting with and had taken to cutting and rolling smaller balls and weaving in lots of ends...and I also could have done that...if I was a knitter with more perfectionist tendencies...but I didn't and kept going. 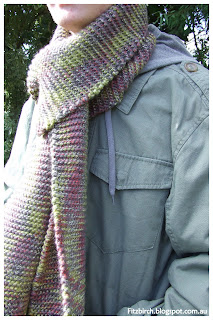 The pattern was a simple Cast on 30 stitches, knit as many rows of garter stitch as you please, Cast off -   and it only took a week of night time knitting to get it done.  After I had knitted up one ball of yarn I did a bit of measuring and decided that I really didn't want to leave myself short and so headed back to the wool shop for a couple more balls of Amber.   Now I have a couple of balls left over for a future project, and by then I'm hoping to have worked out the maths so I don't end up with vertical stripes.

I feel the Dr Who scarf is still some distance away!


Thanks so much for visiting.  We'd love to have you join us on Facebook , Pinterest  & Ravelry too.
By FitzBirch at August 10, 2013