There is nothing better than school holidays.  I am fortunate to work in a school and when my children were small, it enabled us to have this time off together.  It was wonderful.  However, they are all grown now and whilst my son still lives at home, he doesn't need entertaining which means that this time is now mine and this holiday I was planning on all things spinning.

Firstly, there was a small matter of a pre-arranged holiday in a Forest Chalet overlooking the inlet to be had.  This meant evenings of watching the kangaroos from our balcony whilst having a wine or two.  It also meant hours of knitting and, as luck would have it, the small town in which we were holidaying had a spinning shop so it also meant an hour or two browsing all things wool.   All in all, the most delightfully relaxing break.

Now that I was back home, together with Evie (my new spinning wheel) I was ready to dip my toes into the world of homespun .

I had been practising on some natural crossbred merino tops but, lets face it, you can't just browse in a wool/spin shop, so I came armed with some new roving to spin.
Some strawberry merino and some English Leicester which the owner of the spinning shop said would practically spin itself - it didn't!

Two evenings later I had a bobbin of strawberry and a bobbin of leicester.  Both of them spun very differently to the merino I was used to.  It kept getting away from me in places and somehow, I managed to get the leicester tangled on the bobbin.  Don't ask me how, it just happened.
It looked so lovely on the bobbins though. I was starting to feel like quite the spinner.  I hadn't intended to ply them together but somehow they seemed right for each other. I thought I would give it a go.


Dad had also made me a lazy Kate for the spinning wheel and there is something quite hypnotic about watching the wool gently unwind from the bobbin and twist together onto the wheel.  It took a while and allowed me to see all the mistakes quirky characteristics of my spinning coming together.  Some parts looked exquisite whilst other bits left me shaking my head - it looked like it had come straight out of the bag, unspun.  But I continued to ply.

I had also purchased a Niddy Noddy at the spin shop.  I couldn't even begin to comprehend even thinking about asking Dad to make me one.  It was best that I just quietly purchased it.  I happily wound the wool onto this little gadget but forgot to count how many times I wound.  Now I had no idea how much homespun I had.


Then, it was time to hang the skein.  I had read that you can lightly steam the homespun to set the ply - which I did.  .. and still I continued to feel like quite the spinner

Winding time made me a bit nervous but it wound beautifully.  It was a thing to behold.  I was impressed with the way it looked.  It had a genuine 'homespun-ness' to it.

Once it was wound, I discovered that it had a thickness of 9 wraps per inch which makes it a worsted weight.  I think in this instance, worsted translates to roughly anything from lace weight to super bulky because during the plying stage I saw every yarn weight coming together - this was going to make knitting with my first ball of homespun from my spinning wheel very interesting indeed.

Having no real idea of just how much wool I had and lacking a decent scale to weigh my homespun, I just launched into a very basic cowl.  When I say basic, I doubt that it could be any more simple.

I chose to knit it in 7mm needles.  Even though the usual sizing would be about 8.00mm, I knew the variations in the yarn and went 'middle of the road'. 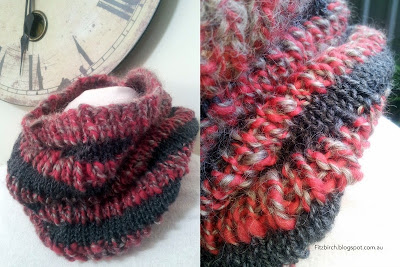 The 8ply is knitted on the same sized needles giving a slightly looser feel.  It helps to accentuate the homespun striping by helping it to come forward.

Using whatever homespun is to hand, cast on 100 stitches using 7.00mm circular needles.
Set up a foundation row of K1, P1 and join, being careful to ensure that the knitting isn't twisted.

Continue in rib pattern for a further 4 rows.

Join 8ply to cowl and knit for 5 rows

Change to homespun and, continuing rib pattern, rib for 4 rows.

Continue the homespun and DK striping until you have 4 repeats.

Change to homespun and rib 5 rows.  Bind off in rib pattern.

So .. there it is.  The simplest of cowls made with my very first batch of homespun.
Whilst I noticed all the quirkiness of the different yarn weights when I was plying, they were extremely evident whilst knitting, making it very clear just how far I have to go in my spinning journey.   I'm not usually a knitter of bulky yarns though, so I enjoyed just how quickly it knitted up - just one night.

There are some benefits to super chunky yarn then.

Thanks so much for visiting.
We'd love to have you join us on Facebook , Pinterest  & Ravelry too.