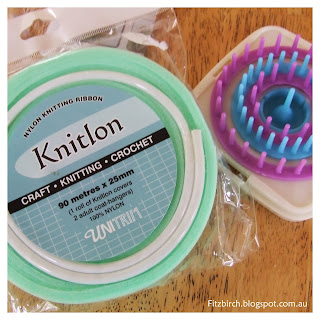 Living in a country a long way from anywhere, you soon learn that objects are not necessarily named identically in different parts of the world.  In Australia we wear thongs on are feet, we sleep under a dooner and sometimes we like to sit on our verandas...we're a quirky bunch like that.

Not that long ago I wrote of our difficulties in finding mint coloured anything to make ballet hair accessories  and in my desperation I couldn't help myself when I stumbled across "Knitlon" in the most desirable shade of green.  I admit to making a couple of assumptions about Knitlon, the first being that the whole world called it Knitlon and secondly that it could only be used for covering coat hangers or making dolls to cover the spare toilet roll in the bathroom.  Turns out I was wrong on both counts. 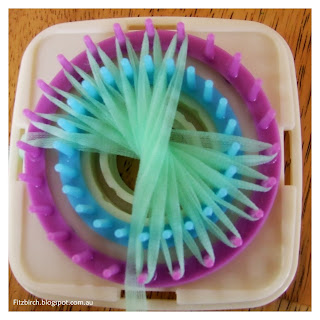 Knitlon (or Craftlon or Nylon Knitting Ribbon, depending on where you live) is actually quite wonderful for making little hair accessories.  While I was tempted to crochet with it,  I'm still experimenting with our little flower loom (you can see our original flowers here) and so decided to have a try with that first.

Our last attempt on the flower loom was using a single loom, but I had a hankering for something different so decided to try two layers and see how it would turn out.  Usually I'm all for smaller accessories, but the Knitlon is quite springy and tends to shrink a bit when it's taken off the loom, so I went with the largest flower loom coupled with the next size down.  Placing both of these in the stand I looped the Knitlon around the largest loom first and when complete continued on with the smaller loom.I darned the centre in place and added a little crystal bead to finish. 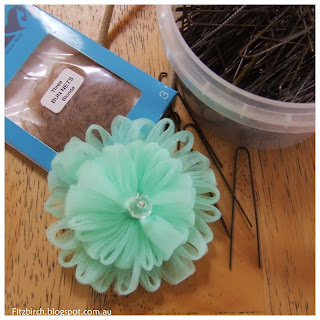 Attached to a hair comb or slide/barrette, simply pinned with a bobby pin or added to a headband I think Knitlon flowers  have turned out to be quite the perfect hair accessory.


Thanks so much for visiting.  We'd love to have you join us on Facebook , Pinterest  & Ravelry too.