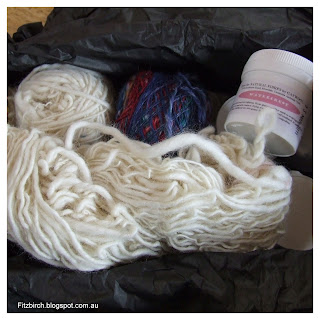 If there's someone in your life who's a bit partial to doing some craft, my handy hint to you is to make sure that at each birthday or Christmas there's a little something (or two) that they can knit, weave, sew or make.  When Louise, my sister and fellow blogger, mentioned that her first forays into learning how to spin hadn't quite matched the standard she was hoping for and the wool produced  wasn't behaving as it should (you can read about it here) , I got a bit excited for my daughter, whose birthday was fast approaching.  My parents had already purchased a small weaving loom and Louise's wonderfully textured yarn would be perfect for a beginner weaver.  Louise then went a step further and added some dyes into the mix so that when the gift arrived it was a wonderful box of craftiness. 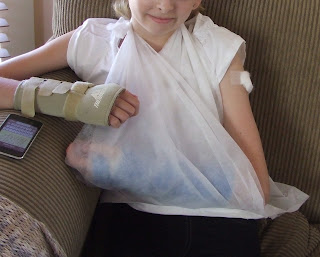 While my daughter would normally leap into a project like this as quickly as she could open the wrapping paper, an unfortunate injury meant that crafting was out of the question for her actual birthday and the weeks following.  It was with joyful relief when the cast on her arm was finally removed and the long awaited dyeing could begin. 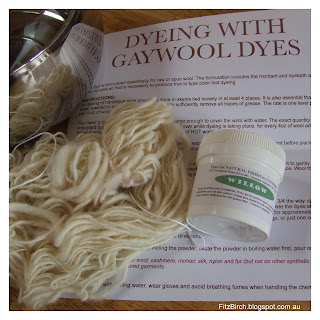 Louise had included a variety of colours from the Gaywool Dyes range in the parcel and the instructions called for the wool to be boiled for half an hour.  While I know that my daughter would have jumped right in and used whatever kitchen implements she could find, I was a little concerned that my good saucepans and specially sought out kitchen tongs would never be the same again once they had come into contact with the dye, so off we went to the local disount store to buy the cheapest saucepan that we could find and found an old pair of chopsticks in the kitchen draw which we thought would do a wonderful job of lifting, stirring and prodding the wool as it absorbed the colour. 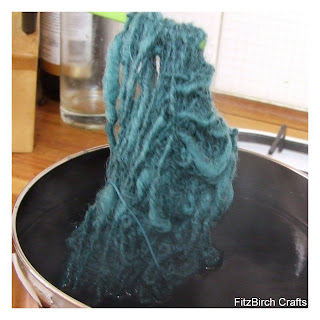 As it turned out I really needn't have worried about staining as everything rinsed perfectly clean, but it does feel it little more professional to have our own set of implements specifically for dyeing.  I  can't praise the Gaywool Dyes enough, they're very easy to use and the strength of colour is really wonderful, to the point that I would probably use less of the dye next time to produce a more pastel shade.

The dyeing process:
1. Bring a pot of water to the boil.  There should be enough water to cover the amount of wool you will be dyeing.
2. Mix the required amound of dye (in this instance we used a lid full of Gaywool "Willow") into a small amount of hot water and when dissolved add to the saucepan of boiling water.
3. Take the wool and wet with warm water and a small amount of kitchen detergent and then place in dye bath.
4. Gently turn the wool over or lift the wool out of the bath and replace during the first four minutes.
5. Keep the water at boiling or near boiling for a total of half an hour
6. Rinse in warm water until water runs clear, wring out as much as possible and hang on the line to dry. 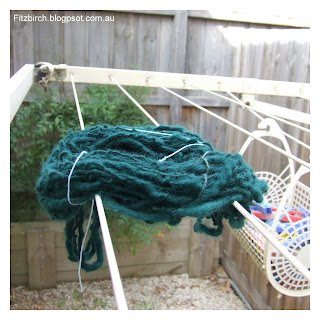 At this point we were hoping the local bird population wouldn't see our wool hanging on the line as a wonderfully convenient and colourful lining for their nests! 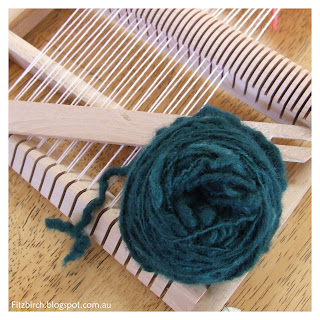 ...and here is the finished product.  We were thrilled with the final colour and can't wait to start weaving with it, but that's a blog update for another day.

Thanks so much for visiting.  We'd love to have you join us on Facebook and Pinterest too.
By FitzBirch at May 13, 2013