Before I proceed with the Single Crochet, I found this youtube video  which, although for right handers and without sound, does show how I hold my wool and after much experimenting I’ve found this grip and wool hold to be the most comfortable and allows me to have a smooth crochet action.

I’ve now been crocheting for two days and I admit that in my excitement,  I did forgo my daily walk in order to perfect the chain and I may have been spotted in the waiting room of a medical establishment, wool and hook in hand practicing single crochet.   It turns out crochet may even be more addictive than Sock Knitting!   I feel like I’ve come such a long way in a very short amount of time and I’m thankful that my Moda Vera Marvel 8 ply 100% acrylic  has stood up to the task of being crocheted and undone many times without fraying or looking worn in any way.  I've since heard someone recommend starting with acrylic rather than wool and perhaps that's due to the vigorous wear and tear the beginning crocheter places on their equipment.

The extra time I took to practice the chain, until I was pleased with the tension and how I was holding the hook, appears to have paid off as  the single crochet seemed to just flow from my fingers.  I watched this video from Teresa at “The art of crochet”  and again, was very relieved with the slowing down of the video the exact moment I thought “Hang on a second, I didn’t quite catch that”.  I watched the video,  did a couple of rows of my newly acquired stitch, then another few rows, undid that, watched the video again and then attempted to make a square.  My first attempt at a larger piece of single crochet ended up much more triangular than I had hoped, (I like to think I was deliberately practicing how to decrease)  but I quickly worked out that I was not doing the first chain stitch at the beginning of each row. 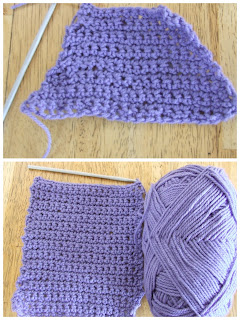 My second attempt was much more successful and I’m going to practice for another day or so, before I proceed to “Double Crochet”.  It's interesting to compare the pictures of my first attempt and one a few hours later.  What a difference a bit of practice can make!

I’ve had a quick look and I’ve just realised there are 200 videos in the series – How many crochet stitches can there be?

Hope you’ll join me next time

Thanks so much for visiting.  We'd love to have you join us on Facebook too.

Previous updates in this series: