Having gained a satisfactory foothold on single crochet, the time has come to move forward on my crochet journey.  I am enjoying this whole process immensely and while I'm always slightly nervous moving forward, my thirst for new stitches far outweighs my reticence.  Just yesterday I passed a divine crocheted jumper hanging on the sale rack in the doorway of a local shop and thought "One day I'll make myself something like that", and although I'm not quite at the point of setting up a crochet Pinterest board, I'm definitely getting closer.

To start Double Crochet I once again turned to "The Art of Crochet" youtube series and found that this was the only video I needed for this stitch.  Once again I felt the need to stop and start the beginning of the video to actually work out what was happening, but it didn't take long to pick up the general idea and have a go.  I think the main issue I had with double crochet was the beginning of each row and trying to establish which stitch I was supposed to be picking up. 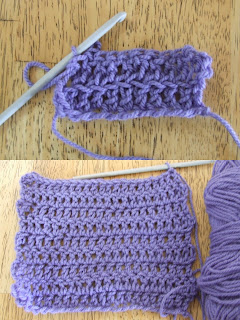 In exciting, but slightly disturbing news, Louise, my sister and co-blogger, has found a fantastic project for the two of us to work on and I've somehow been nominated to take on the crochet portion.  I really hope the next video from the informative folk at Crochet Geek is a tutorial on how to crochet flowers!


Hope you’ll join me next time

Thanks so much for visiting.  We'd love to have you join us on Facebook too.
By FitzBirch at August 14, 2012