How to Knit For A Perfectionist

No .. The Perfectionist is not me, it's my son.  I have tried over the years to force my knitting on him .. Nothing too large, the odd scarf or 2, socks, beanies and the like but he never really embraced it.  He did wear one of my knitted scarves earlier this year and got some positive comments.  He seemed a bit chuffed as he told me.  I was secretly thrilled but kept it to myself.

Fast forward to a few weeks ago and he asked me to make him an Aran knit jumper.  FINALLY, all my years of hard work have paid off!  I jumped at this and said to him, rather foolishly, to find something he likes and I'll get started. 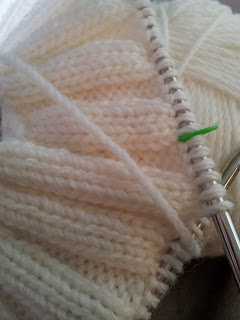 He has decided on a beautiful Bergere de France pattern knitted in 12 ply.  Sounds fine I said.  See if you can located the pattern.  Not a problem!  Shortly thereafter he comes back with it ... In French. I like a challenge and I have always wanted to learn French so I downloaded the Google translate app and set to work.   I was quite excited that I might be able to learn 'French Knitting'.  87 stitches in French is easily recognizable in English so I had my start.  I always try to knit jumpers in the round to eliminate side seams so I set to work, knitted up the ribbing, discovered that I had used the wrong sized needles and had to start again.  Misread the patten - not a good start in any language.


After countless, fruitless attempts at translation, (wrap wool over the head of the lamb was one brain teaser) I reluctantly admitted defeat and ordered the English Pattern from Intoknit in the UK.

But while we wait, here is the pattern for the scarf that started it all. 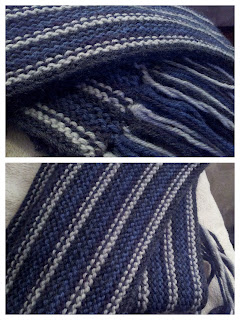 The scarf is knitted using circular needles which makes the long, coloured stripes and is a fabulous project for using left over balls of wall. I used 4 different colours and if you have read the blog about my knitted Medusa creation, you will recognise the blue wool - waste not, want not when it comes to knitting.

Using circular needles in a size appropriate to the yarn you are using, cast on approx 350 stitches (350 works for 8ply/worsted weight).
Knit to the end. Do not join up. Turn the knitting to commence the next row.
BEFORE YOU BEGIN this and every row, leave about 30cm of yarn free. This yarn will form a loop at the side of your knitting and becomes the fringe.

Knit 3 rows of each colour until your work measure about 10cm (4inches) and then cast off.
The scarf may look a little messy at this stage but all it takes to finish it off is a quick snip in the middle of the loop and then tie it firmly to the yarn next to it.

It's a very simple scarf yet it looks masculine - just right for an exacting teenager, or so I'm told.

Thanks so much for visiting.  We'd love to have you join us on Facebook too.
By FitzBirch at August 03, 2012